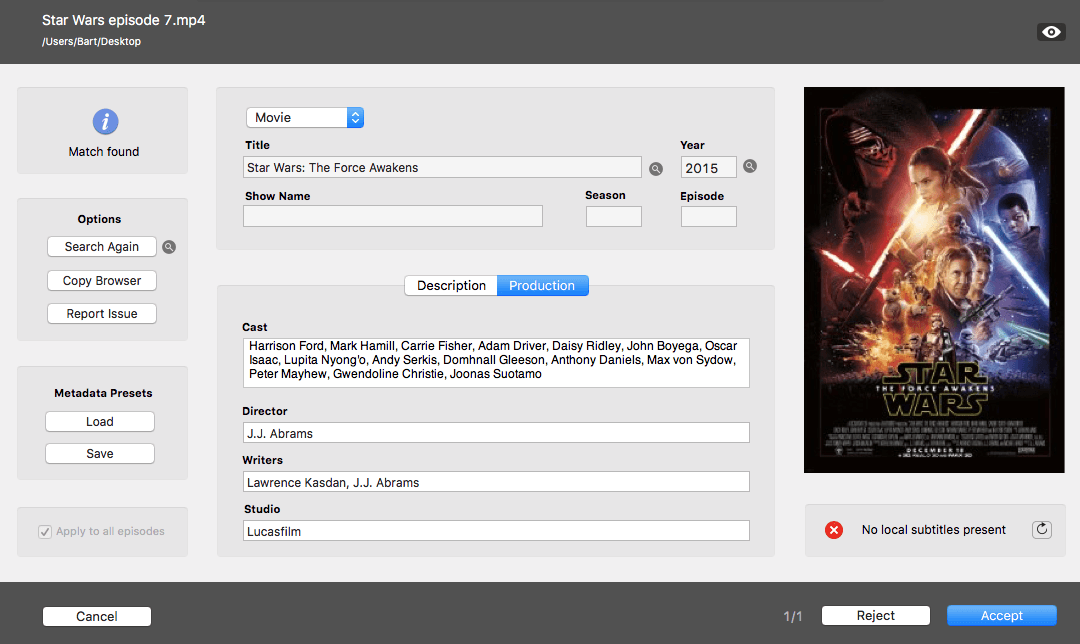 At the start of the new year, we’re working hard to release a new version of VideoDrive for Mac! So what’s new?

Well, we’re preparing for Siri on the new Apple TV. At the moment, Siri does not search local libraries, but we’re hoping Apple will add this feature soon. To this end, we’re adding support for new metadata fields: cast members, producers, writers, directors, studio information and show descriptions will soon be included in your iTunes videos. This way, this information is present when Siri will be able to search for it in the future: getting all movies with your favourite actor or by some director will only be a question away. And of course, this new information will also be displayed in iTunes and on your iOS devices.

The new VideoDrive will have more robust Hot Folders. In case you forgot, Hot Folders are folders on you Mac that VideoDrive monitors for new videos (even when VideoDrive is not running!).  They’re very handy when you’re dealing with a lot of video files. Just have them arrive in a Hot Folder and VideoDrive takes care of adding them to iTunes with the appropriate descriptions and artwork. In the new version, Hot Folders will be more reliable when you have videos arriving in sub folders. Now, these sub folders will become Hot Folders as well. A new interface will make it much easier to create and remove Hot Folders.

And, videos arriving in Hot Folders will now be properly queued in case they are still downloading or being copied. You’ll  be able to see in the Video Queue which videos are incomplete or ready to import. And there’s no need to wait: you can already confirm metadata for incomplete videos. When the file is complete, VideoDrive will automatically import the file in iTunes.

Sometimes, videos might get misidentified if there name is ambiguous. If you disabled the option to review metadata before saving, the video with wrong metadata would be added to iTunes. If you have a large library, it would be annoying (and sometimes confusing) to hunt down the video and correct its metadata. Not anymore: a new retag feature allows you to immediate restart tagging from the main window! Just click the little blue button below the video queue to add the right metadata!

Next on the agenda: performance. The new VideoDrive will be faster when handling larger video collections, download subtitles in the background and save metadata faster, especially when videos are located on remote disks.

Finally, a new version is not complete without a lot of bug fixes, compatibility improvements and refinements. A beta version of VideoDrive 3.3 is now available for download. If you’re a registered user, give this new version a try! The final version will be released later in Q1 2016. Happy New Year 🙂

Update: the final version of VideoDrive 3.3 is available now!